I just checked on Speedtest.net, and my connection is now 4 Mbps! The upgrade wasn’t meant to happen until 1st May, so either it’s early, or Sure are just testing the network. Lets hope it’s the first one.

Update @ 7pm: I have run a few more Speedtests, and have discovered that speeds have dropped to about 3.2 Mbps. It appears that although the speeds have been bumped up, the 40:1 contention ratio is causing slowdowns during those peak evening periods. As speeds get higher, users will probably notice larger variations in Internet speed at different times of day, dependent on network load.

With less than a month to go until the 4 Mbps upgrade for Guernsey broadband customers, Sure has posted new pricing plans on their website.

The current Anytime plan stays at £24.99 pm and has been rebranded “Sure Broadband”, with the speed being bumped up to 4 Mbps. However, to my disappointment, the upload speed remains fixed at 256 kbps. I was hoping for a bump to at least 512 kbps so that my home Slingbox will work better abroad.

Sure have scrapped the two tier Pro Broadband plans in favour of one plan, now called “Broadband Pro”. It offers the same 8 Mbps download and 768 kbps upload, but with a price of £49.99. This, in my opinion, is still massively overpriced,  but it is a reduction nonetheless.

So, overall, slightly disappointing. I was rather hoping that the Pro broadband would be set at or under a £40 price point, but it is still too pricey for home users having to pay out nearly £600 a year for what many in the UK would consider expensive for the speed you are getting.

I hope the pricing gets cheaper if/when sure introduce ADSL2+ services.

I’m not particularly enthralled about Apple’s oversized iPod, but I thought I’d mark the occasion nonetheless

Now Apple, when are you going to update your Mac’s??

Line attenuation is simply the measure of how much signal is lost on your ADSL line from when it leaves the telephone exchange. The more attenuation, the lower the signal ‘strength’, and so eventually the slower your internet connection.

This is one of the main reasons that many people don’t get the advertised ‘up to’ speeds that they expect. If you live a long way away from an exchange, then it is likely that your line attenuation is very high.

There’s a really great website that allows you to input your line attenuation, and it tells you approximately how long your telephone line is. Butit also tells you the maximum speed that your line can connect at. This is a good way to see if your line could support higher speeds, if you were planning to upgrade to a higher speed service, for example. 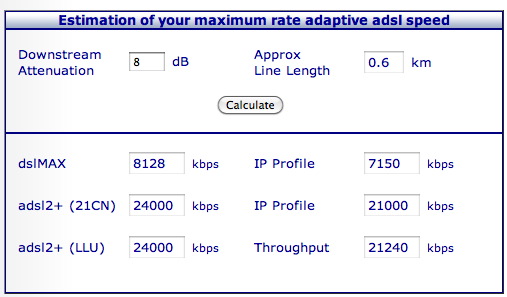 Here are my results for a Guernsey ADSL connection. What makes it so painful, is that the line could support full ADSL2+ speeds, but it isn’t yet available on the island.