Earlier this year, Sure in Guernsey upgraded all of its users to it’s “up to 8 Meg” service. When I first saw the announcement, I thought, “Finally, Guernsey’s no longer lagging behind in the broadband market!” We actually now have a much more reasonable deal than we did only a few months ago. Double the speed for the same price, still unlimited, fairly comparable to average UK speeds, and very (if not more) reliable.

However, is Sure actually delivering on it’s promise of “Up to 8” Mbps? As people know, many ISP’s in the UK are criticised for marketing it’s broadband speed as xx Mbps, but then nobody actually ever gets to it. So I’m investigating to see if C&W are delivering the speed which they say they are giving out to users. There is an important point to realise, however. The further away you live from the telephone exchange, the slower your internet will be, regardless of how much you pay/what package you are on. It is simply a fact that as the copper loop length increases, more signal “attenuates” (is lost) and so not as much data can be transmitted over longer distances (Think of it as getting worse signal on your mobile phone, the further away you are from the mast). There is absolutely nothing that you or your ISP can do. So if you live a long way away from the exchange, you are always going to get slower broadband than advertised. [Having said that, the ISP can install fibre-optic street cabinets closer to your house, but that’s another matter!]

So, how about Guernsey? Luckily, I live right next door to one of the Island’s telephone exchanges (about 500m away or so). So theoretically, I should be receiving the full 8 Mbps. There is an easy way to check what ‘maximum’ speed you can attain – by looking on your router’s admin page – by typing in 192.168.1.1 or similar. Here, your router is able to tell you what line speed it is connected at. Mine is exactly 8 Mbps, because I live so close. If you live further away, it decreases this connection speed until your line is ‘stable’ for ADSL. (as explained above). So now the real speed test is as to whether or not Sure’s core network is able to give me the bandwidth that I pay for.

But hang on a minute, there’s something else. It’s that elusive Contention Ratio again! Nobody really knows what it actually means, but we can guess. So, in Guernsey the ratio is 40/1, and that effectively means that 40 broadband users ‘share’ 8 Mbps. But it is bound to be more complicated than that, otherwise our internet would be much slower! So in my opinion (not that it counts for much), Sure probably have a large main internet pipe, lets say just for the sake of it that this pipe is 800 Mbps. They then split this up into 100 (800/8 Mbps = 100) and each of these 100 amounts is given to 40 users. Remember, each ‘amount’ is 8 Mbps of dedicated, pure bandwidth. BUT, this is then shared (contented) with 40 home users. However, each ‘amount’ is able to be shared across other ‘amounts’, so that if one bit of the pipe is full, the other empty bits can be used. Make sense? Not really! Anyway, here is a summary: Your home internet is shared between about 40 other people, so you can never expect to get the full advertised speed…

So why am I looking into internet speed then? Well, as a consumer paying £300 a year, I expect to be able to get as close to the speed I’ve been advertised as possible. I’m not expecting there to always be a full dedicated amount for myself – that would be greedy (and expensive) – but I should be getting quite close most of the time, because on average not every user is using the internet at exactly the same time. I want to see how the actual download speeds compare to the advertised ones to see if the contention amount is reasonable or not. Here are the results:

I used Speedtest.net, because it is reliable and easy to use. I did 5 speed tests, with different servers. I did the tests deliberately at a peak time: 6pm on a Saturday evening. Here is the raw data (excluding one, dodgy screenshot..)

As you can see, the speeds vary quite a lot! Nowhere near the 8 Mbps target. As a quick sidetrack, I will not be investigating the upload speeds, because they are less important for the majority of users. From theses results, my average download speed was 5.81 Mbps. This is only about 70% of the advertised “up to” speed! 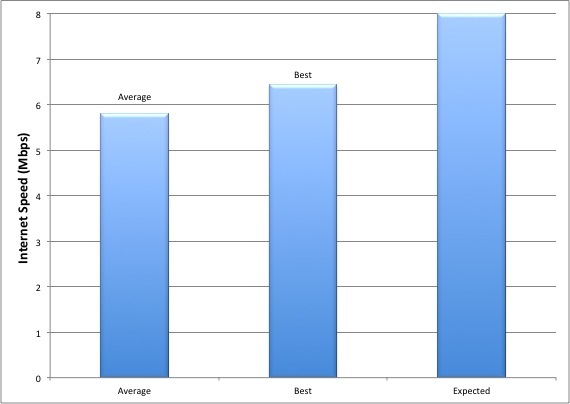 The graph also shows us the disparity between advertised and actual quite well. Even my best effort, a whopping 6.5 Mbps, wasn’t close to the 8 Mbps target!

So, overall, quite disappointing actually. I certainly am not getting what I am paying for! There are of course limitations to this rather un-scientific approach. Contention is a big factor, if not the factor which determines your speed when your router is synced up at it’s maximum. It’s just a shame that Sure seem to be skimping where bandwidth is concerned. If it’s not available, then don’t sell it! It is a big improvement from a few years ago, but network upgrades should occur so that the speed you are selling to customers matches as closely as possible “real world” speeds in testing.

As a final thing, I noticed that Sure had made a video for Channel Television, about how users can get the most out of their internet. I found it quite amusing, actually. They recommended changing your microfilters and making sure those pesky wi-fi devices aren’t interfering with your router! Really, it’s Sure’s problem that there is too much contention. Changing your ADSL set-up can cause you to increase your ADSL sync speed, but it won’t increase your effective throughput speed. That is up to them!

Leave some comments if you’re reading this, please!