Last week the States of Guernsey released the ‘Guernsey Connectivity Review’ report, undertaken by Analysys Mason. You can see the full PDF document by going to the States website here.

My thoughts on this report are mixed. Firstly, I do wonder how much money the States spent on ‘consultancy fees’ to produce this document. I guess though the important thing is that internet access is on the governments agenda, even if no actual action has been taken yet.

An interesting thing about the document though, is that it provides some data from Sure that wouldn’t otherwise be publicly available. For example, they claim that only 10% of subscribers have taken up the ‘Superfast Broadband’ (VDSL) product, which did actually surprise me a bit (I thought it would’ve been higher than that).

As I read through it, I highlighted a few things that stood out that I will list here, in no real order:

1.) “Broadband services to JT’s subscribers are supplied on a wholesale basis via the Sure network.” [p.19] – This has obviously been the case all along – JT offers exactly the same broadband as Sure does, with only a very minor price difference. I fail to see how true broadband competition can exist when there is a single monopoly wholesale provider, that doesn’t seem to be regulated very harshly. In the UK ADSL market, LLU allows for providers to have their own physical equipment in the exchange, with the ability to offer different speeds and service levels that they choose.

2.) The VDSL rollout has stalled at only 60% penetration [p.20]. According to the February 2016 statistics (provided by Sure themselves, mind you), VDSL is only available to 60% of households on the island.  We need to remember that VDSL has been available on the island since September 2012, that’s approaching 4 years ago. If we look at the UK figures, BT had already reached a 66% population coverage of VDSL at the same time as Sure launching the product. Today, the coverage of superfast broadband in the UK is now over 90% of the population (admittedly, with state aid above the 65% mark, approximately). However, it’s really important to remember that Guernsey is an island of just 30 square miles, and the world’s 14th most densely populated jurisdiction. One of the reasons for state aid being necessary in the UK is that the remaining 30% of the population lived in relatively rural areas. The same cannot be said anywhere in Guernsey really. It’s also a fact that, in terms of raw population coverage, we are 4 years behind the UK.

3.) VDSL take-up on the island seems to be very low – only 15% of total subscribers have taken up the VDSL service (weirdly, this 15% figure contradicts the 10% figure used earlier in the report – perhaps older data?). Again, if we compare this take-up figure with the UK data of around 33% (Ofcom 2014, extrapolated by a year), it does appear to be fairly poor. The data is slightly confusing, since it’s not entirely clear if that is a % of households who are already covered by the VDSL footprint, or % of total households. If we had 100% VDSL coverage, the actual take-up number would obviously be higher, but it’s unclear if the % would go up. I think a focus should be made on asking WHY people in Guernsey aren’t opting for superfast broadband. The first obvious answer to me would be price. Comparing with a UK operator, e.g. Sky, they charge £37.40 per month for line rental and 40/10 VDSL. In Guernsey Sure charge £44.98 for line rental and 40/5 VDSL. However that doesn’t tell the whole picture – at any given point in time there is often a deal available with at least one of the UK operators, offering much cheaper VDSL. This means if you regularly switch you can end up saving a ton of money. For example, right now BT are offering 55/10 VDSL for just £28.98 per month. That’s over £5 cheaper than Sure’s standard ADSL! I realise fully that comparing Guernsey to the UK is not necessarily accurate or ‘correct’, but I feel it’s an important area to look at.

I suspect that another reason VDSL take up is low is due to consumers not realising it is even available, or just not really considering it. For many, ‘broadband is broadband’, and the speed they receive is the speed that they get. If their connection struggles when multiple people use iPlayer, I get a feeling many would just blame Sure regardless, and not realise they can get a much faster service. Sure have been pushing Superfast on the radio and in the press over the past year, as well as offering a discount if you sign-up, but this leads me onto my 3rd point. The name ‘superfast broadband’ may confuse some people, especially when in the UK the same product is labelled as ‘fibre’ (even though it obviously isn’t). Maybe a rebrand to make the VDSL service a lot more distinctive in name would help here? See the screenshot from Sure’s website: 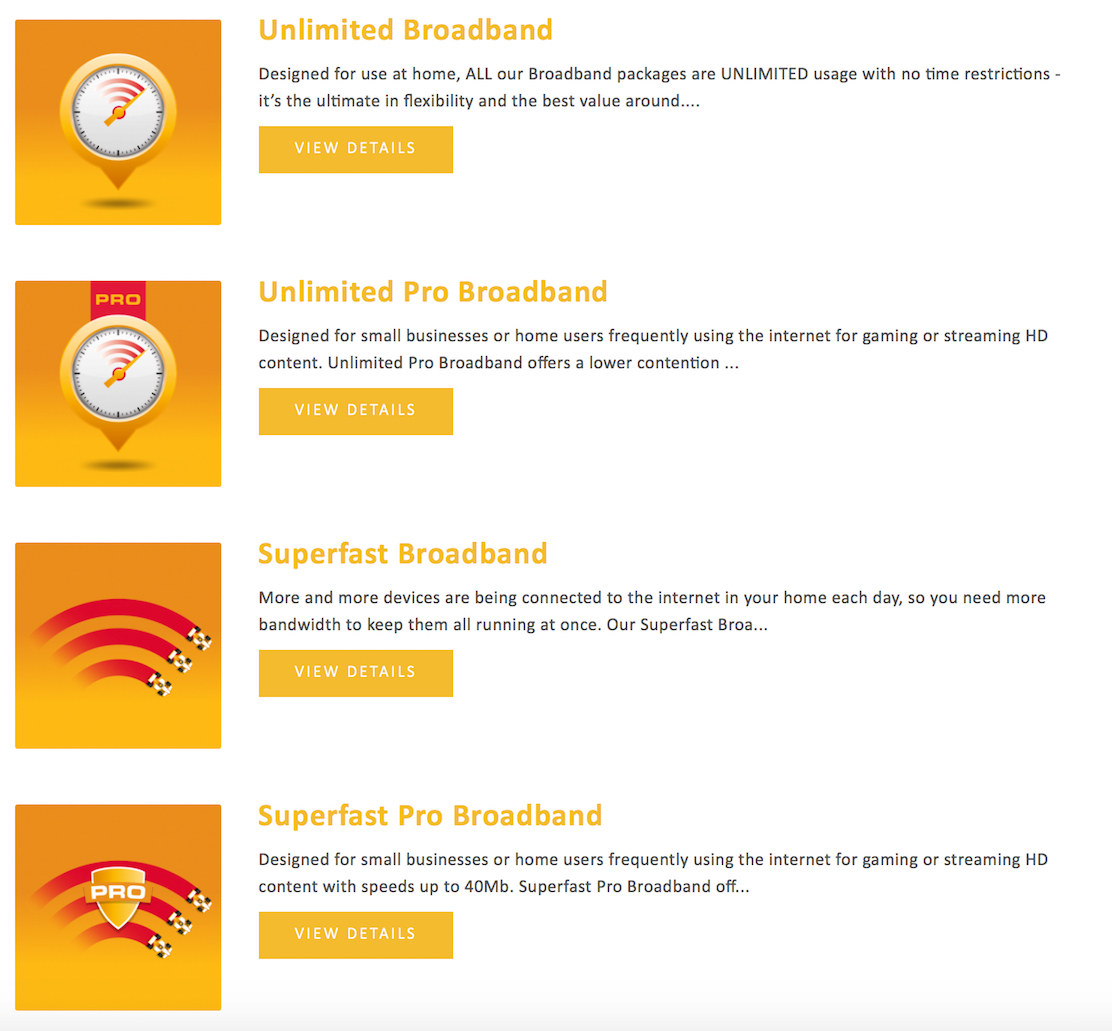 There are 4 products all called ‘broadband’. Personally I see little point in the ‘Pro’ products since they are practically the same as their non-pro counterparts, except for a static IP and lower contention ratio (and what difference that actually makes is questionable). My point here: is having 4 ‘broadband’ products confusing people, when the UK advertising that we see on the TV is constantly pushing ‘fibre’? I suspect this may be playing a small part.

My final ‘possible minor reason for the low take up’ is the engineer install. For people that have busy lives, having to book an engineer in to fit the filtered faceplate could be a negative reason not to get VDSL. Again, in the UK, more providers are offering self-install options for FTTC that simply involve using a microfilter rather than a faceplate. I do agree that a faceplate is superior, but as long as your internal wiring isn’t dodgy, a micro filter can still work.

4.) The report blatantly confuses DSL sync speed with throughput speed. It compares the average sync speed of Guernsey connections against international metrics of average download speed. The effect of this is obvious: it makes Guernsey’s internet appear faster than it actually is, when compared to other countries. The other concerning aspect is that the Guernsey data is provided by Sure – and not an independent authority.

5.) The term ‘FTTC’ is often used to describe Sure’s VDSL product when, in fact, this is not really the case. As far as I know, they use a mixture of roadside and exchange-based MSAN’s. This means that all telephone and data services terminate at the same place – unlike FTTC where POTS continues back to the exchange.

6.) “We understand through our discussions with Sure, that a number of improvements to its existing copper access network are planned, including (a) expansion plans to install additional MSAN cabinets around the island, with the aim of making VDSL accessible to all properties; and (b) the introduction of vectoring, FTTdp and G.fast in 2017. We also understand the company intends to increase FTTH penetration in Guernsey in the period 2018–2020.” [p.44].

This statement is probably the most revealing, since we get a small glimpse into Sure’s future plans. The first point is essentially that they plan to increase VDSL coverage to the entire island. Clearly this is good news, though they don’t give a timeframe for this, nor does Sure reveal whether they will be funding this privately or asking for States money.  The second point reveals they probably intend to trial some future technologies, such as G.fast, which could offer 500Mbps+ speeds, assuming short enough line lengths. FTTdp is probably a planned intermediary for lines that are a bit too long and exist in the more ‘rural’ areas of Guernsey to receive a fast VDSL service. Vectoring is something which wouldn’t actually increase speeds, but just prevent speeds from going down due to crosstalk, when more people sign-up to the VDSL service. They list 2017 as the introduction date, which is fine, but by then Jersey will probably be near or at completion of their FTTH rollout. The final point is probably the most interesting – Sure intends to offer some sort of FTTH by 2018-2020. Could these be due to potential pressure from JT’s own FTTH network on Guernsey? (even though no real residential customers are actually able to get it yet, apart from the trial locations).

The rest of the report is mostly generic ‘how to offer NGA broadband’ that could’ve been cut and paste from any other report from any other country. There are also some odd numbers relating to FTTH rollout costs on Guernsey, implying it would be more expensive here than on Jersey? Regardless, the report doesn’t really conclude anything that anyone with common sense hadn’t already concluded. I do get the feeling that Guernsey will go down the ‘superfast copper’ route, whereby gradually the fibre is brought closer to our homes but never actually into them. G.fast will bring fibre within 100’s of metres, and is also the preferred approach of BT. But ultimately it is still a copper wire that does the final stretch, and will still be susceptible to interference and dodgy joints.

My wish-list for this year is only 2 things, however: Native IPv6 and a faster VDSL tier option. 12% of the world’s internet connections are now on IPv6, and it’s time that Guernsey actually led in this area rather than follow. In terms of VDSL, the least I would like to see is another upload speed bump. The report actually highlighted the upload speed requirements for small business and content creators, and that it was lacking on the island. Perhaps make it so that the ‘Superfast Pro’ product was 80/20 – at least the absurd price for this product could then begin to be justifiable.